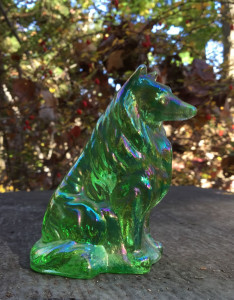 Colorful glass reflecting a rainbow of colors, iridized glass (aka “carnival glass”) is a favorite among Mosser collies fans and a hot collectible among glass collectors in general. The effect of iridization can best be described as having a similar appearance to oil floating on water.

Most of the solid color glass collies were also produced in a “carnival” variation, although in smaller quantities. It’s not uncommon to find collies in cobalt, purple, milk or crystal carnival listed for sale, iridized figures in other colors such as red, green, teal, colonial blue and pink are harder to find and in greater demand. 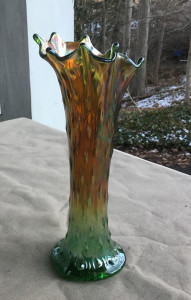 The first companies to produce iridized glassware on a large scale were Fenton, Northwood and Imperial, around the beginning of the 20th century. These items were at their most popular from around 1908 through the second decade of the 1900’s. In the 1920’s, as demand began to wane, this glassware was frequently given away as a souvenir at carnivals – hence the term “carnival glass.” For the most part, production of carnival glass in the US and Europe ended by the early 1930’s, but it began to be manufactured again in the 1950’s thanks to popular demand. To this day, the Mosser Glass Company still produces iridized glass tableware in several colors. 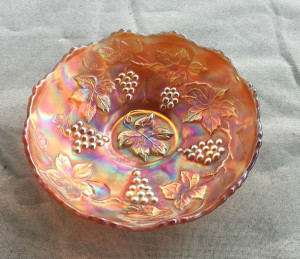 How is Iridized Glass Made?

Iridization is a surface treatment. To get this effect, the piece is removed from the press or mold and exposed to vapors or sprays of heated metallic oxides while the glass is still hot. As the glass cools, these metal oxides “set” onto its surface, creating an iridescent appearance.

The iridization on Mosser collies is more pronounced when lit from the front than when they are backlit. If you want to show off the metallic iridescence with just a subtle hint of the underlying color, light them from the front. If you want the “carnival” effect to be less obvious, place them where the lighting is behind them.

Avoid overhandling carnival glass. Since this is a surface treatment, too much handling can wear it away.