“What year was my collie made?”

Is your collie one of the older ones, or is it from one of the last years they were produced? It can be tricky to narrow age down to a year, especially for colors which were manufactured over a period of time, but there are a couple of ways that can help narrow it down.

In addition to the familiar “M” mark on the left side, collies made through 1980 were stamped with an “M” on the pontil (base.) 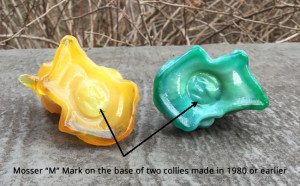 Recent collies were shipped with a paper sticker. These were often removed or they fell of and were lost. Here’s one on the bottom of a Milk collie from the early 2000’s. 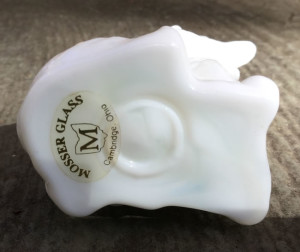 The capital “M” inside of the outline of the state of Ohio was one of three symbols the Mosser brand has used, the other two being a plain capital “M”, and a capital “M” in a circle.

Determining the year by the color

More “hit and miss” is identification of the year by the color of the figure. This is more helpful for getting a ballpark age, since many popular colors were produced over a span of years. However there were some exotic colors and beautiful one-of-a-kind slags which were only produced in the early years.

The colors below, while also manufactured in other years, were the only colors still for sale in 2007 – the last year the collies were made:

Four of the colors from the last year the collies were produced are shown below. I don’t know what year the vasoline or jadeite collies were actually made, the green opal was one of the first two I bought in the late 1990’s. 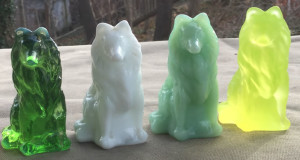